SD Cards often have many numbers, letters and speed ratings labelled on them but what do they mean…

Storage Capacity is represented in gigabytes (GB). The larger the number the more storage space the card has, but you should always check the maximum supported SD card for your device before purchase. It’s also important to know size doesn’t matter, large storage space doesn’t mean the card is better, and Olympus recorders use a special format dedicated to recording professional dictation DSS/DSS Pro, which can give you a whopping 334 hours of recording time with just 2GB of space… Here’s a rough example of the recording times by space. 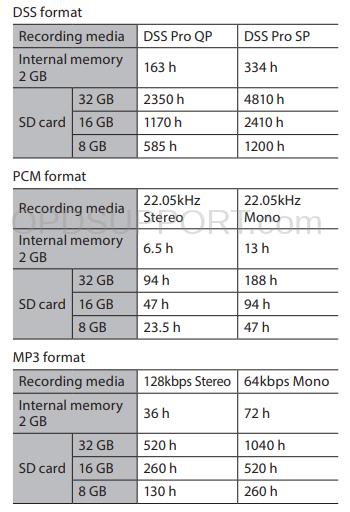 Always check the supported card size for your device, as most devices support a maximum card capacity of 32GB.

The speed class specification is represented by a number inside the letter “C”. It determines the minimum write speed of a card and is an important factor. There are four speed classes 2,4,6 and 10, representing the minimum sustained write speed in MB per second (MB/s). The higher the number the faster the sustained speed. For example, you would want to use a card with a high write speed in your Olympus camera, to ensure the memory is capable of capturing large images in succession.

UHS (Ultra High Speed) cards are represented by a number inside the letter “U”. It determines minimum sustained write speed in MB per second (MB/s). For example, U1 means it’s rated at 10MB/s and U3 is rated at 30MB/s.

UHS Bus Class is different from the speed class, this rating determines the data transfer speed of a card. For example, the Bus interface is similar to a motorway, the more lanes, the higher amount or traffic (data) it can handle.